Featured in Money Compass: Plus Solar Hits RM100mil in Revenue

Recently, we were featured in Money Compass for our insights and initiatives towards the Government’s goal of reaching a renewable energy mix target of 20% by 2025. Not only did the news showcase our immense gains towards our target revenue of RM150mil but highlighted the greater awareness of renewable energy ever since tax incentives such as the Green Investment Tax Allowance (GITA) had been released.

Find the news below:

Co-Founder and CEO of Plus Solar Systems Sdn Bhd, Ko Chuan Zhen said the company has seen an increase in uptake by over 100% since 2018, which proved that there is greater awareness of the incentives for embracing green energy like solar.

“Many are taking advantage of the Government’s push towards renewable energy with the extension of the Green Investment Tax Allowance (GITA), which has since been extended to 2023,”

“This allows companies to offset up to 70% of their statutory income in the year of assessment, and unutilised allowances can be carried forward until they are fully absorbed,” Ko added.

One of the recent commercial projects that Plus Solar has completed includes outfitting close to 1,370 PV panels on the rooftop of Johor’s latest shopping mall, Toppen Shopping Centre, which is part of the Ikano Group of companies. 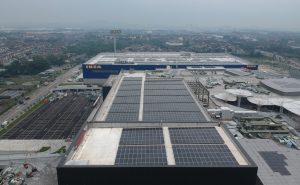 Prior to Toppen Mall and IKEA Tebrau, Plus Solar also installed solar PV systems for IKEA Cheras and IKEA Batu Kawan, for a total of four (4) malls under the IKANO brand which have embraced solar solutions for renewable energy.

IKEA Cheras, in particular, set a benchmark for green buildings in 2016 when its solar power project went live, as the largest commercial solar project in the country for self-consumption. Its production of renewable energy has led to cost savings of RM 450,000 from the store’s operational budget each year.

“We have reached our milestones set for the year and are confident to achieve the target revenue of RM150 million for the financial year ending March 2020. This win continues to demonstrate that we are striving in the right direction and solidifies our position within the industry,” he said.