The global renewable energy (RE) market is expected to be worth about US$ 1.5 trillion in 2025, a huge jump from its value of US$928 billion in 2017. According to PV-Tech, solar, driven by cost reductions will become the main driver of renewables growth, setting new records for deployment in each year from 2022 until 2040. As the world moves towards renewable energy and leverages on the potential of solar, what about Malaysia?

Solar in Malaysia has seen many milestones; going from a payback period of at least 10 years to seeing the ROI in just 3 years, higher access to green financing and more importantly, higher awareness of solar and the overall RE industry.

Ko Chuan Zhen, our CEO and recent 2020 Gen. T honouree was interviewed by Gen. T Asia on how Plus Solar is leading Malaysia towards the widespread use of solar and the energy revolution.

Find the coverage by Gen. T Asia below:

The world uses some 320 billion kilowatt-hours of energy a day, which is comparable to about 22 light bulbs burning nonstop for every person on the planet. More than 80 percent of this energy continues to be powered by fossil fuels such as coal and natural gas. But numerous countries have pledged to move towards a low or net-zero carbon future, and their efforts to make the transition may be quickened thanks to the pandemic.

According to the International Energy Agency (IEA), the world’s response to the Covid-19 outbreak could potentially “reshape the future of energy”. It predicts that demand for coal, which is the biggest contributor to anthropogenic climate change, is unlikely to return to its pre-pandemic levels. The fossil fuel currently supplies a third of all energy globally, but IEA forecasts that this number will dip below 20 percent within the next two decades.

By contrast, the global appetite for renewable energy continues to grow, as countries seek cleaner, green options to power their future. In 2017, the global renewable energy market was valued at US$928 billion, and by 2025, it is expected to be worth about US$1.5 trillion. Solar power, specifically, is looking to become “the new king of the world’s electricity markets”, said Fatih Birol, executive director of the autonomous intergovernmental organisation, in a recent interview with CNBC. “Based on today’s policy settings, it is on track to set new records for deployment every year after 2022.”

In Malaysia, one company pushing for the widespread use of solar energy is Plus Solar Systems, which was established by its CEO and 2020 Gen.T honouree Ko Chuan Zhen, alongside two of his schoolmates, Ryan Oh Zhi Kang and Poh Tyng Huei, in 2012. The company started out as a green energy consulting firm under the name Leaf Energy before it rebranded to Plus Solar in 2013 and widened its range of services to include engineering, procurement, construction and commissioning work.

To date, Plus Solar has built and installed more than 200MWp in solar photovoltaic systems across commercial and industrial buildings as well as solar farms around Malaysia. For the fiscal year 2020, it has generated about US$36 million in revenue despite the poor economic climate, up from just US$31,000 in its first year of business.

Plugging the gaps in the market 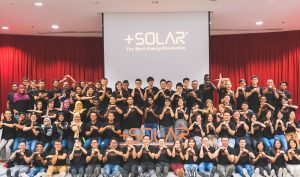 When they were starting out, Ko and his co-founders saw several gaps in the nascent renewable energy (Green Power) market in Malaysia. “There was a common misconception that solar was a very expensive solution and could only be afforded by the rich,” says Ko. “Some also had the impression that it had a long payback period of at least 10 years when in fact, they could see a return on their investment in just three years.”

This also translated into a financial sector that was unsure of how it could fund companies in the renewable energy space or those who are hoping to invest in it. “There’s a need for more financial institutions to offer customised loans for the adoption of renewable energy.” To address this, Plus Solar organises complimentary awareness seminars for local bankers and in 2018, it held a national conference to promote the role of renewable energy.

Before that, the company launched the Plus Solar Academy in 2014 as a CSR programme to further bridge the knowledge gap. Since its launch, the academy has educated more than 3,400 students from universities all over the world through hands-on experiences such as workshops and on-site visits.

We want to drive and accelerate the transition from traditional to clean energy. We aim to be an energy revolutionist.

Powering the industry into the next generation

Plus Solar is also disrupting the traditional energy industry through the digitisation of its solutions. Its AIoT energy management software for businesses works like a “Fitbit for buildings”, says Ko. They help users to optimise their power consumption by “analysing the energy patterns and data of their building from a single platform, turning insights into cost savings and business intelligence”. With this, clients can save an average of up to 25 percent on electricity.

As Ko and his team continue to develop their proprietary technologies to help their clients save more money, they have also set their sights on expanding further within Malaysia as well as entering new markets in Asia. “We want to drive and accelerate the transition from traditional to clean energy. We aim to be an energy revolutionist,” says Ko.