Interviewed by Malaysia SME: The sunny side of solar power

Like never before, solar energy is booming in Malaysia. As MESTECC’s initiatives to increase a higher adoption of renewable energy continues to liberalise the industry, they have also stimulated an increase in the public awareness of solar and its players. Ko Chuan Zhen, our CEO and co-founder, was interviewed by Malaysia SME to share his insights on the industry and how Plus Solar’s solutions have helped clients reduce their energy consumption.

Find the interview below:

As the global trend shift towards a more sustainable source of energy, the demand for solar panels has been steadily growing across various industries, from residential and commercial to even industrial sectors. Complemented by the continuous support from the Government, the increased demand resulted in more companies specialising in solar power to rise up and cater to that segment.

Plus Solar Systems Sdn Bhd, a homegrown energy consulting firm that is driven by the vision of clean energy transformation, speaks to MALAYSIA SME® regarding the solar energy industry in the country.

“The market for solar power is really big in Malaysia now. In fact, we’re one of the ‘hottest’ markets in Southeast Asia,” says Plus Solar chief executive officer and co-founder Ko Chuan Zhen.

Originally established as Leaf Energy Sdn Bhd in 2012, Plus Solar was later formed in 2013 to deliver quality turnkey solar photovoltaic (PV) solutions. The company started with four people who are passionate to make a change in the community by providing solutions that would impact the clean energy industry.

Being one of the founders of the company, Ko shares his story on how he developed an interest in renewable energy. “Despite being an engineering student, I didn’t really enjoy engineering. I felt that it wasn’t suitable for me. But when I went for an internship in Taiwan where I had the opportunity to conduct multiple research on topics related to solar and renewable energy, I was hooked.”

He mentions that even from around 12 years ago, Taiwan has already started the move towards renewable energy and there was huge interest coming from financial institutions and investors who were keen on funding projects or innovations revolving around renewable energy. This trend inspired Ko to further pursue his passion and focus on developing a career around that particular industry.

“On the flight back to Malaysia from Taiwan, the plane was flying over Sepang and I remember looking down at the empty spaces around the area, thinking how great it would be if we could fill up all that space with solar panels. And that’s when the dream began,” he reminisced.

From then on, Ko spent four years gaining knowledge about solar technology from multinational companies before establishing his own business. Back then, he notes, one of the biggest [challenges] on getting started was the lack of awareness among the general public about solar power. 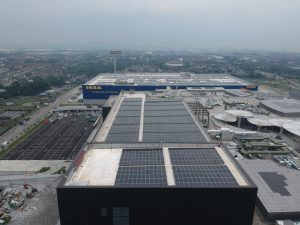 “People were still thinking too small at the time. When the topic of solar power came up, among the first things that came to mind for them was [solar] powered streetlights and parking lots. They couldn’t really grasp the potential of the industry in order to utilise it on a much bigger scale,” Ko opines.

He adds, “However, the level of awareness regarding solar energy now continuously improves every year, among both the general public and industry players as well.” To spur the industry, the Government introduced the Green Investment Tax Allowance (GITA) in 2018, allowing companies to waive incurred taxes when purchasing equipment, materials or machinery related to solar energy. Ko believes that the GITA, which is valid until 2023, will encourage more companies to finally begin their journey towards utilising renewable energy.

The market for solar power is really big in Malaysia now. In fact, we’re one of the ‘hottest’ markets in Southeast Asia.” — Ko Chuan Zhen

Since its inception until now, the Ko notes that the company’s growth have been steadily [increasing]. It now has up to 130 employees and still growing, with office branches located around the country, namely in Penang, Ipoh, Kuala Lumpur and Johor Bahru. To date, the company managed to help generate over 130 megawatts (MWp) of solar energy, which is equivalent to powering up around 32,000 houses.

Although Plus Solar does not manufacture its own solar panels, the company’s experience in the industry allows it to advise its clients on the layout design of the solar panels. So far, a majority customer of the company is more towards developers of large-scale power plants and commercial industrial projects.

“We’ve assisted our clients from various industries in their journey to leverage solar energy. However, only a certain portion of the energy can be sourced from solar. The rest of it will still come from Tenaga Nasional Bhd (TNB). Despite that, our clients are still able to significantly reduce the cost and energy consumption compared to before,” he notes.

Ko explains that the amount of energy sourced by solar power can range from 5% up to over 50%, depending on the number and size of solar panels installed on the roof of a building and how much energy is being used at one time. If the building consumes a large amount of energy, only a small percentage of the energy will be sourced from solar, even if the building has a wide roof space that is covered by solar panels.

Local solar power farms act as an independent power producer (IPP) and sells the energy to TNB at a tariff rate. Prior to that, the IPP and TNB would have to sign a power purchase agreement (PPA) in order to settle on the price.

Ko believes that this shared energy concept will be most beneficial to any industry that consumes a tremendous amount of energy. They need to think about energy and cost-saving solutions, and I believe that solar power is the most suitable to benefit such industries.

Beyond solar, the company is also able to provide consultancy services on how their clients can save costs even further via other energy-saving methods.

“Solar energy is just the starting point to effectively save energy. It is definitely not the end of the line,” Ko ends.